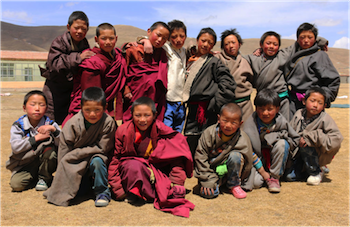 Tibet had always exercised a unique hold on my imagination as a kid. Locked away in its mountain fortress, I dreamed of discovering this mysterious place.

Last month, I had the opportunity to teach English at the “Emancipation of Wisdom School” in Golog. It is an experience I will never forget and always cherish in my heart, for the memories are what wild dreams are made of. After a week of travel from Australia, I was welcomed with open arms and treated by my fellow teachers like one of their own. On a cold Monday morning in spring, I walked into the snow-covered school yard where a hundred young boys greeted me with curious eyes. They observed my fair skin and brown hair while I watched with interest their colorful monk and Tibetan robes. Most of them had never seen a teenage western girl before – only in American action movies which they occasionally watched on a tiny television screen. When we crossed paths, they bowed as a sign of respect.

For the next two weeks, I taught the young boys the basics of English while they listened attentively, eager to learn. “Where from?” asked a 12-year-old monk one afternoon after I had finished teaching his class the English alphabet. “Australia,” I answered, but he seemed confused. The boys are taught Tibetan, Chinese, English and mathematics but subjects like geography are not part of the curriculum. They have class from 8am and work diligently until 9pm – but none seem to mind the long hours.

To them, knowledge is the key to a better future and most dream of travelling the world – something that is very hard for a Tibetan in the current political situation. At lunch time, they wash their face with a bucket of cold water or play soccer and basketball. “Teacher, come dance,” said an 8-year-old nomad, after lunch – rice and yak – one Tuesday.

To the beat of a Tibetan guitar, the whole school started dancing in the yard. A magical sight. Moments like these made the adventure worth it. I could forget for an instant that my last shower had been a month ago or that my toes were cold.

The school is poor and there are no showers, toilets, running water and the electricity is limited. But despite the harsh conditions, the students and teachers always have big smiles on their faces. They dance, play, laugh and learn together like one big family. I’ve never seen young boys so eager to study. Everyone sleeps at the school in dorms during the week and go home to their families on Saturday.

I was one of nine teachers with four young men and four monks. The boys are like sons to them. The language barrier was tough but we managed through sign language and my few words of Tibetan and their few words of English. After two weeks of experiencing their daily life, I was sad to say goodbye.“See you later teacher,” screamed the boys from across the playground. “Come back soon?” asked the headmaster in Tibetan. “Yes sir,” I nodded, as he gently pressed his forehead against mine to say farewell.