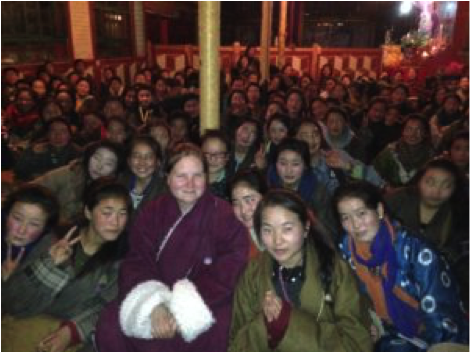 In the summer of 2016, Antje Steenhuizen was in Golog where she taught English lessons at our school in Pende Menkhang, and also visited the Institute for Tibetan Medicine. We asked her three questions about her experiences and impressions.

Question: What made the greatest impression on you about the situation in Golog, and what would you like to share with the reader?

What made the greatest impression on me was the way the monastery functioned. It is a monastery, a school, a hospital, and a care facility for the sick and elderly that have no other possibility for care. The patients do not have to pay for the medical care that the hospital offers, such as consultants, traditional medicines and treatments. The patients may make a donation for the care provided, but for those that cannot pay they are still given medical help. The elderly are cared for by those that live in the surrounding areas by cooking meals for them and visiting them often. The student I was staying with had an 83 year old woman living with her because the older woman could no longer care for herself. This care system is made possible by donations from the people from the villages and mainly from the self-less giving from the lama-doctor, students, and monks and nuns.

I was shocked by a story told by my hostess. A mother of a nine year old girl, that she was caring for in her home, was brought to her because her family couldn’t care for her anymore. Her mother had cervical cancer because the family did not have enough money, she could not be treated in a modern hospital while the cancer was treatable. Now, the mother was so sick that she couldn’t care for her child and the child was left to care for her sick mother.

Question: Can you provide an idea of how important it is that the nomadic population is provided schooling and can you sketch a scene of what the health care is at this moment?

That is not so simple. I think that it is important that the Tibetan culture continues to be passed on through having lessons in the Tibetan language, and for who are able to learn Tibetan medicine. I think that education is important because it gives people the opportunity to use their mental faculties for a productive and worthy manner. It is important because it strengthens their position in society including their economic position.

Accordingly, the health care is clearly separated between the western, Chinese, and Tibetan medical system. The western system is combined with the Chinese medicine in the Chinese hospitals in the larger cities. An example is that western anti-biotic are prescribed and operations are performed. Operations are very expensive and there is no universal health plan like we know in the Netherlands. In Xinning, (Tib Siling, the capital of the province Qinghai) there is a relatively new hospital where Tibetan doctors work according to the Tibetan health system thus implementing massages with herbal mixtures and “moksa.” In this hospital are people that studied at the Institute that I visited with my two companions. Also there are Tibetan doctors with a traditional education that open their own offices in Xinning and other places in the area.

As said before, the Institute is also a hospital. There were rooms where patients stayed for months under the care of the lama-doctors and doctors in training. Treatments could last for longer periods before the effects were truly evident. In smaller villages, the Tibetan doctor’s small office was where you could go for medical treatment.

Question: Could you tell us something about the life of a child in the area from the experience you gained and what Dutch organizations can do to care for these children and provide help that will be beneficial to their future?

I think there is a large difference in this. Some children go to live in the monastery at the young age of five years old. There they receive room and board and schooling. Other children live the majority of their youth by their family. If the family has enough money, then that child can attend a ‘normal’ government school for their elementary education, and can often live in a dormitory.

Many of the students that I became acquainted with at the Institute never had this chance. The Institute was their first form of formal education. Some of the children were 14 years old when they first learned the Tibetan alphabet, but some were younger. These children did not attend school before they came to the Institute, but helped their parents with the care of the herd.